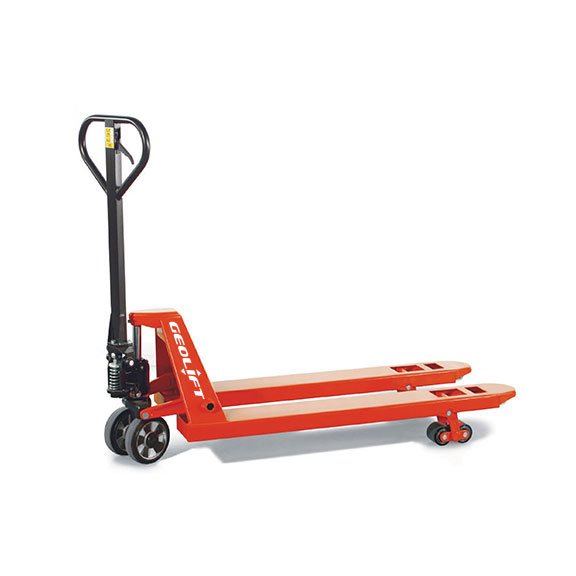 The AC Series Standard Hand Pallet Truck are the standard of excellence, suitable for moving loads in all types of applications. Here all its advantages are effectively utilized.

2. Additional entry and exit fork rollers guarantees maximum stability and safety for transporting goods on slopes.
3. Ergonomically designed handle with comfortable rubber grip allows optimized safety as well as comfort.
Three position operational handle control lever for lifting, transporting and lowering purposes.
4. Excellent galvanized whole casting hydraulic pump, robust and durable, with fine control of lowering speed and overload valve, low routine maintenance.
5. Optional black powder-coated one-piece intergrated pump.
6. Option of different coating material for both steering wheel and fork rollers.
Polyurethane—ideal for delicate floors with hard wearing and non-marking property, quiet and durable.
Nylon—low drag efforts, high resistance to chemicals, non-marking, preferred in food, fishing and chemical industries with smooth level floors.
ADVANTAGES of Geolift Hand Pallet Trucks:
Reliable, sturdy, torsion-resistant due to its extremely strong quality steel profile with Germany standard WAGNER painting system ensures best powder coating and paint quality
All pivots points are greased ensuring excellent maneuverabilily with effortless steering. The chromed bearing bushes and joint ensure quiet oeprations and a particularly long service life.
All About Pallet Jacks
A pallet jack, also called a powered pallet jack, a single pallet jack, a double pallet jack, an electric pallet truck, a walkie stacker, or a power jack, is a tool that's used to lift and move pallets. It can transport small loads easily, and it's less expensive than a forklift. Workers who carry heavy, bulky pallets by hand are at risk for injuries, which can be harmful to workers and costly and inconvenient for employers. The risk of injury is lowered with the use of a pallet jacket.
Each pallet jack has a set of forks or blades, a hydraulic lift, and wheels. The forks are about a foot apart. They are 160mm wide, with fork lengths between 1150 and 1220mm. Most pallet jacks can raise their loads about 200mm. Buyers or renters can choose a manual or electric pallet jack. Pallet jacks are some of the most popular tools in many retail warehouses. If you're searching for a way to improve productivity in your business, pallet jacks may be your answer.
History of Pallet Jacks
The pallet evolved along with the pallet jack in several stages. At first, people positioned spacers between loads so the forks on pallet jacks could be placed and withdrawn easily. Then people put boards on top of stringers to make skids that resembled modern pallets.
Skids are the predecessors of pallets, and they've been used for thousands of years. The first skids worked as bases for the secure storage of irregularly shaped goods such as kegs. Wooden skids often had iron or steel components, and stringers or legs were attached to a top deck. Live skids had casters on the base for easier positioning, but dead skids did not.
Modern Pallets and Pallet Jacks
Modern pallets for transporting goods as well as storing them appeared in the late 1800s. They kept workers from needing to place boards on top of pallet jacks to carry smaller objects, and they improved weight distribution. They were also more durable than skids, so they reduced the risk of stringer collapse. In 1887, a manual low lift hand truck was invented that could elevate a skid a few inches. It used cranks and levers to lift pallets or skids. A more durable, all-steel design was introduced in 1909. These early lift trucks resembled forklifts, but they had lift platforms instead of forks.
High lift fork trucks were developed in the last half of the 1910s, and manual pallet jacks have existed since at least 1918. Modern pallet jacks have been around since 1926. These advances enabled workers to stack pallets for more efficient storage. Warehouse employees often called lift trucks or pallet jacks tiering trucks because they were used to stack or tier units or loads of products.
Common Pallet Jack Options
As a worker raises the jack, linkages force the wheels down, lifting the forks above them for easy movement. When the jack is lowered, the front wheels sit inside the forks. That way, you can use it to bring delicate objects as close to the floor as possible before unloading them.